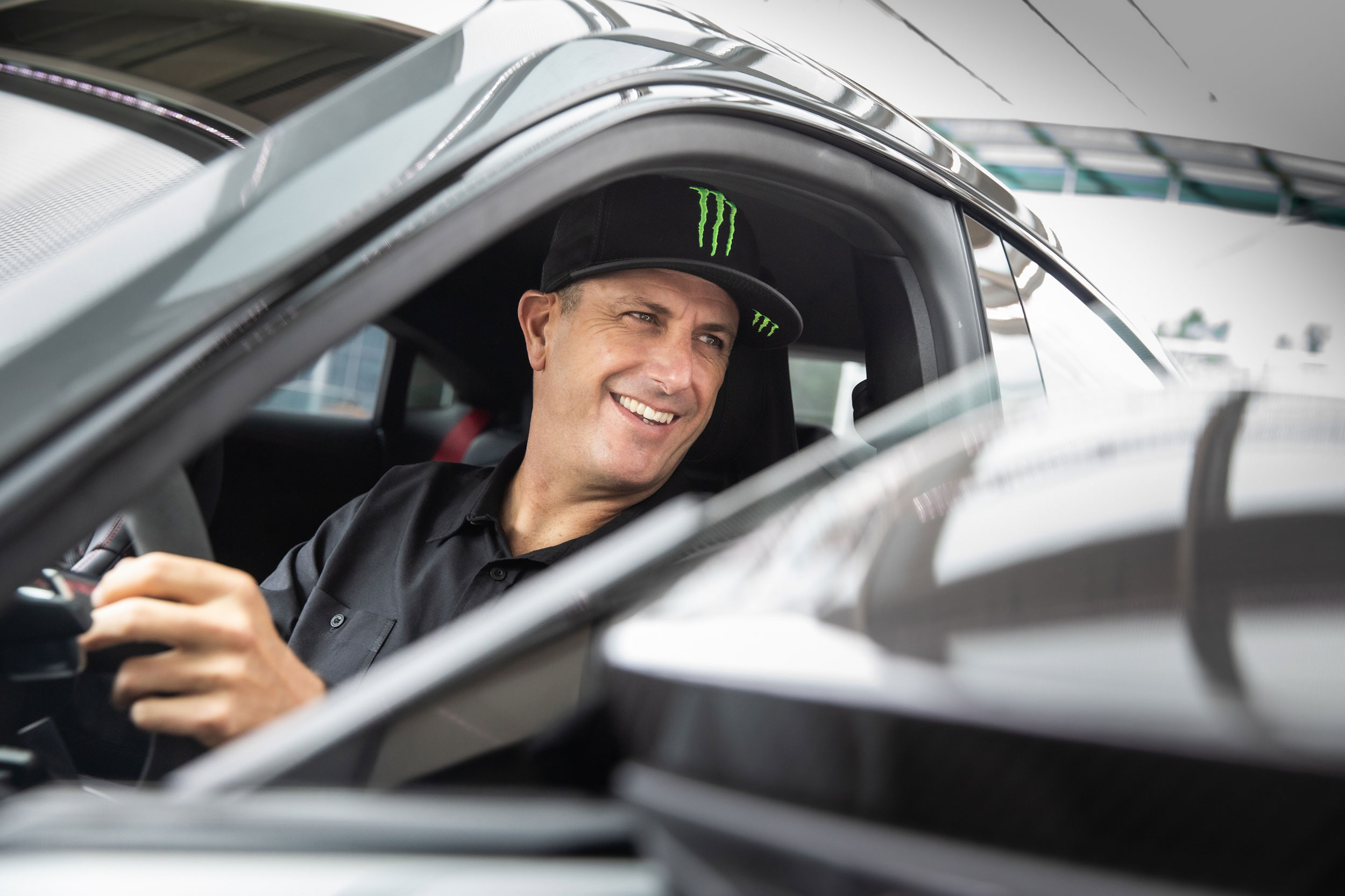 The term GOAT, or Greatest Of All Time, is thrown around a lot. NFL quarterback Tom Brady is often referred to as the GOAT, and rightly so. But in the case of Tom Brady, there are other NFL quarterbacks, both past and present, whose talents are legendary. Ken Block was also a GOAT, but in his case, there really aren’t any other ‘Ken Block’s’ out there because he was the greatest in the space he created.

Born in Long Beach, California, Ken Block was one of the co-founders of the popular skateboarding shoe and apparel company DC Shoes. It was purchased by Quicksilver in 2004 for $87 million. 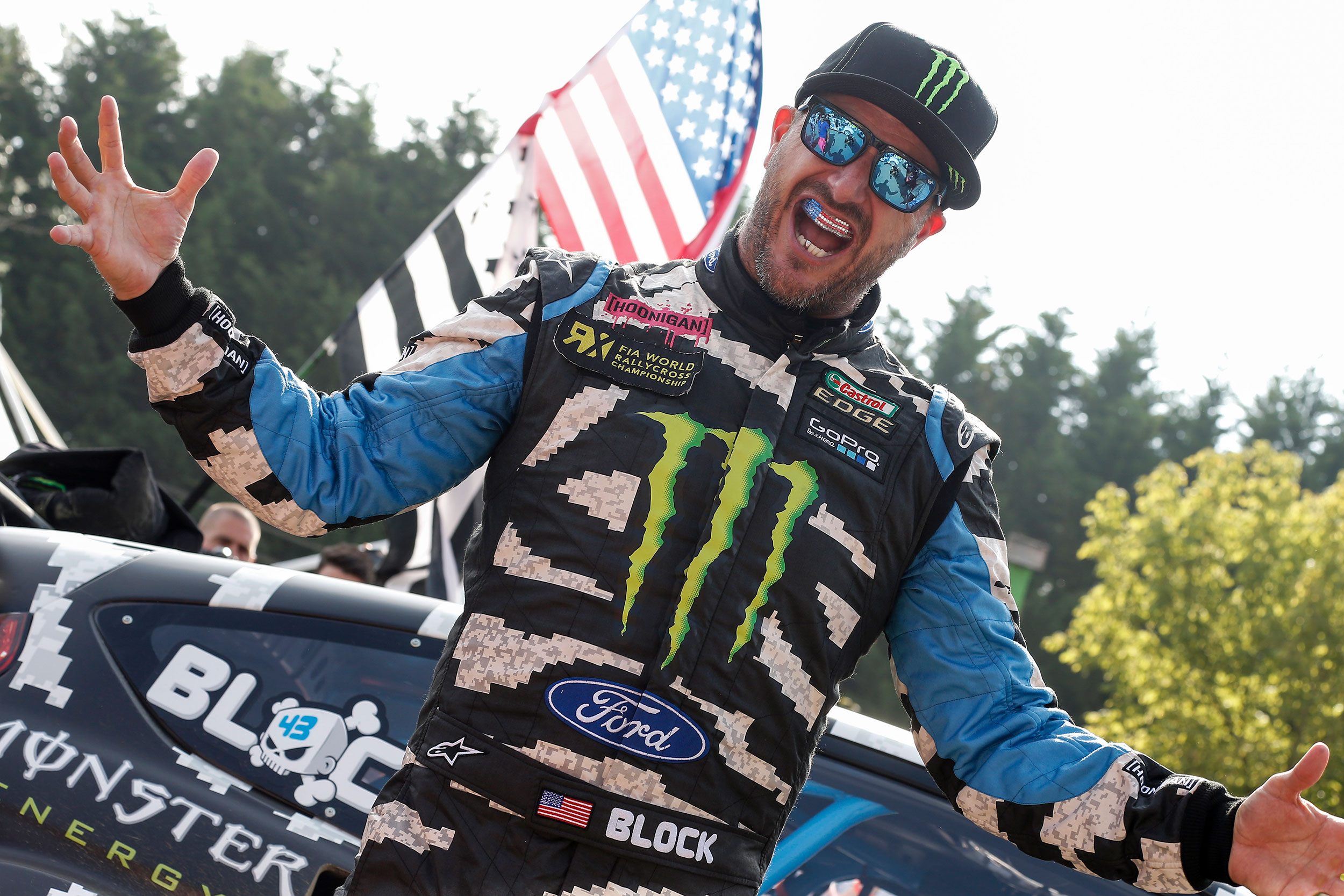 From 2004 to 2018 he competed in more than 150 rally car races in the FIA World Rallycross Championship, Global RallyCross Championship, Rally America, World Rally Championship and the FIA ERX Supercar Championship racking up 23 wins and 43 podiums. He also won 3 Silver and 2 Bronze X Games medals between 2006 and 2015. Block made his racing debut at the 2004 Rally of the Tall Pines in Bancroft, Ontario.

Among Ken Block’s most popular endeavors was the creation of the Hoonigan high-performance gear and apparel brand, and the incredible driving and drifting Gymkhana videos. Since the launch of the Hoonigan YouTube channel in October 2010, it has attracted more than 5.3 million subscribers. Their videos have been viewed more than one billion times, 1,095,436,702 to be exact.

According to Hoonigan Industries, the definition of the word Hoonigan is “A person who operates a motor vehicle in an aggressive and unorthodox manner, consisting of, but not limited to, drifting, burnouts, donuts as well as acts of automotive aeronautics. One who hoons.” Block was the head Hoonigan. 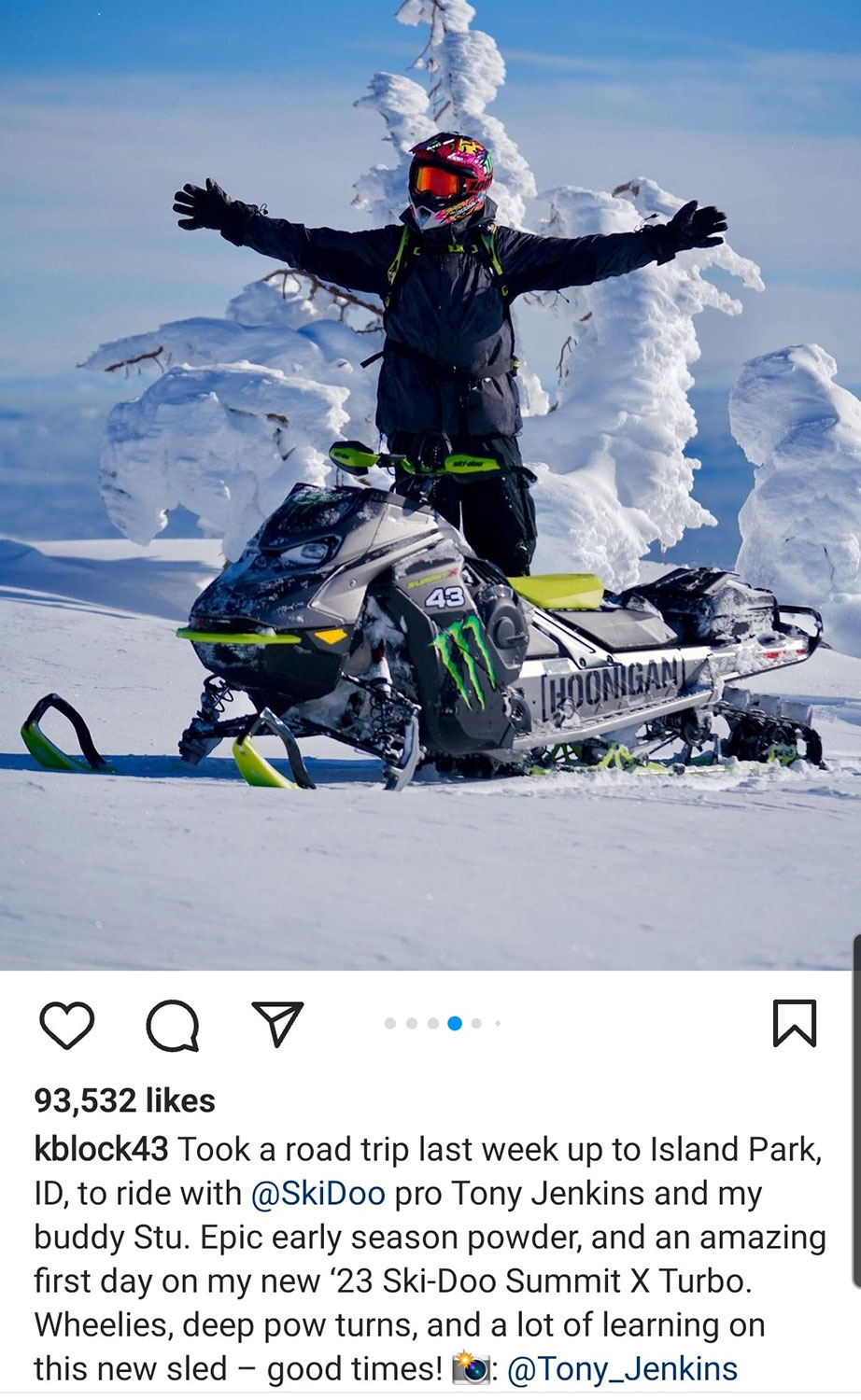 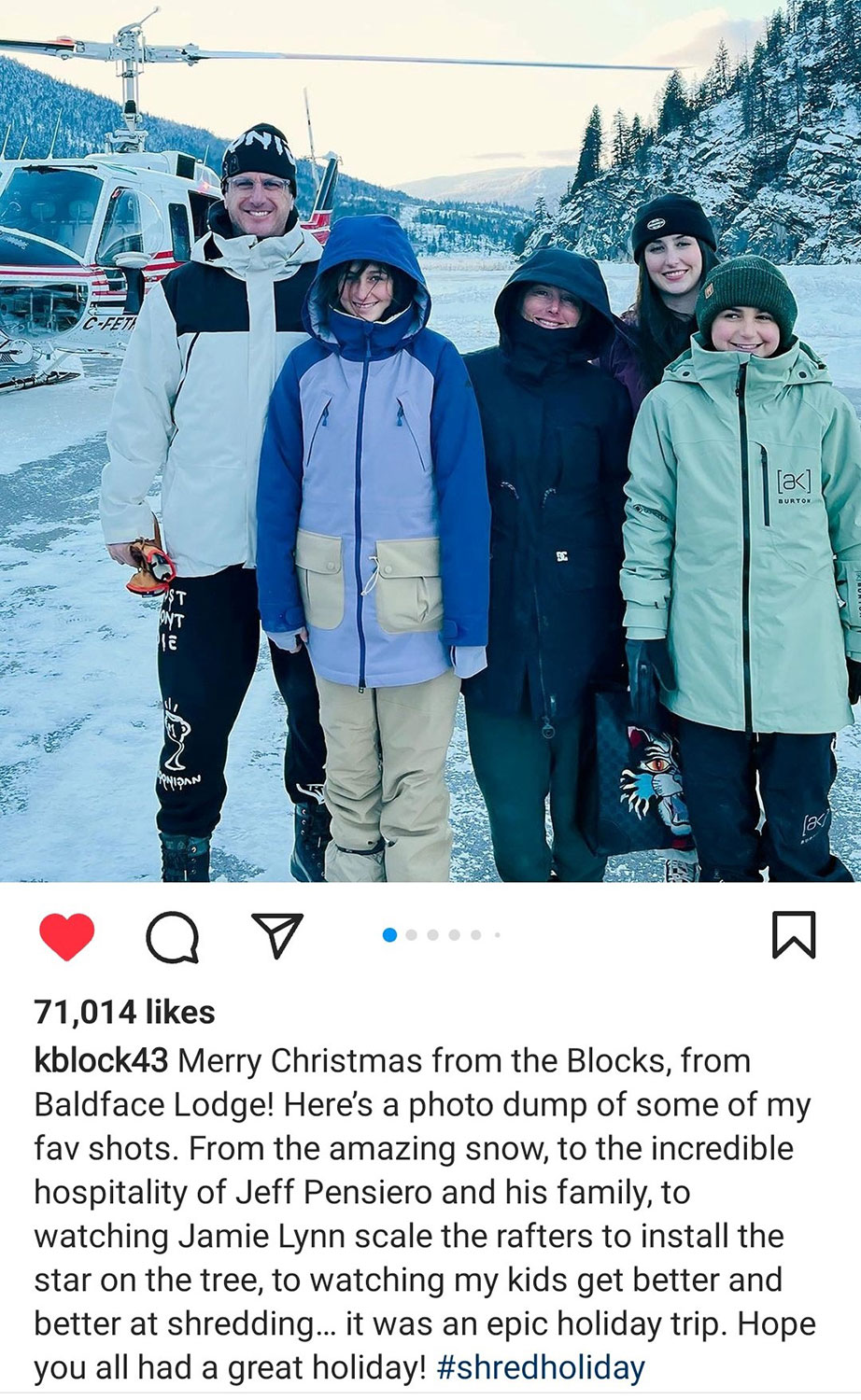 The Wasatch County Sheriff's Office in Herber City, Utah, posted the following on their Facebook page: “On January 2, 2023 at approximately 2:00 p.m., the Wasatch County 911 Center received a call reporting a snowmobile accident in the Mill Hollow area. Search and Rescue, along with law enforcement from Wasatch County Sheriff’s Office, Utah State Parks and the U.S. Forest Service responded. The driver, Kenneth Block, 55-year-old male out of Park City, Utah, was riding a snowmobile on a steep slope when the snowmobile upended, landing on top of him. He was pronounced deceased at the scene from injuries sustained in the accident. Mr. Block was riding with a group but was alone when the accident occurred.”

“We lost our hero yesterday,” stated DC Shoes in one of their posts. “Ken Block was not only the co-founder of DC, but he was the personification of everything our brand stands for. Confidence. Creativity. Innovation. Pushing Boundaries. Colliding Worlds. Ken was a visionary and a pioneer. Our team comes to work every day conscious of the fact that we operate in his shadow, navigate by his compass, and compete with his legacy. Father. Founder. Force of Nature. There is nobody like Ken Block. He is an icon. Our hearts and prayers are with Ken’s family and the many people in the global DC tribe whose lives he touched for nearly three decades. We simply cannot overstate his impact or what a devastating loss this is. Ken will be missed, but certainly never forgotten.”

Ken Block is survived by his wife and three children. 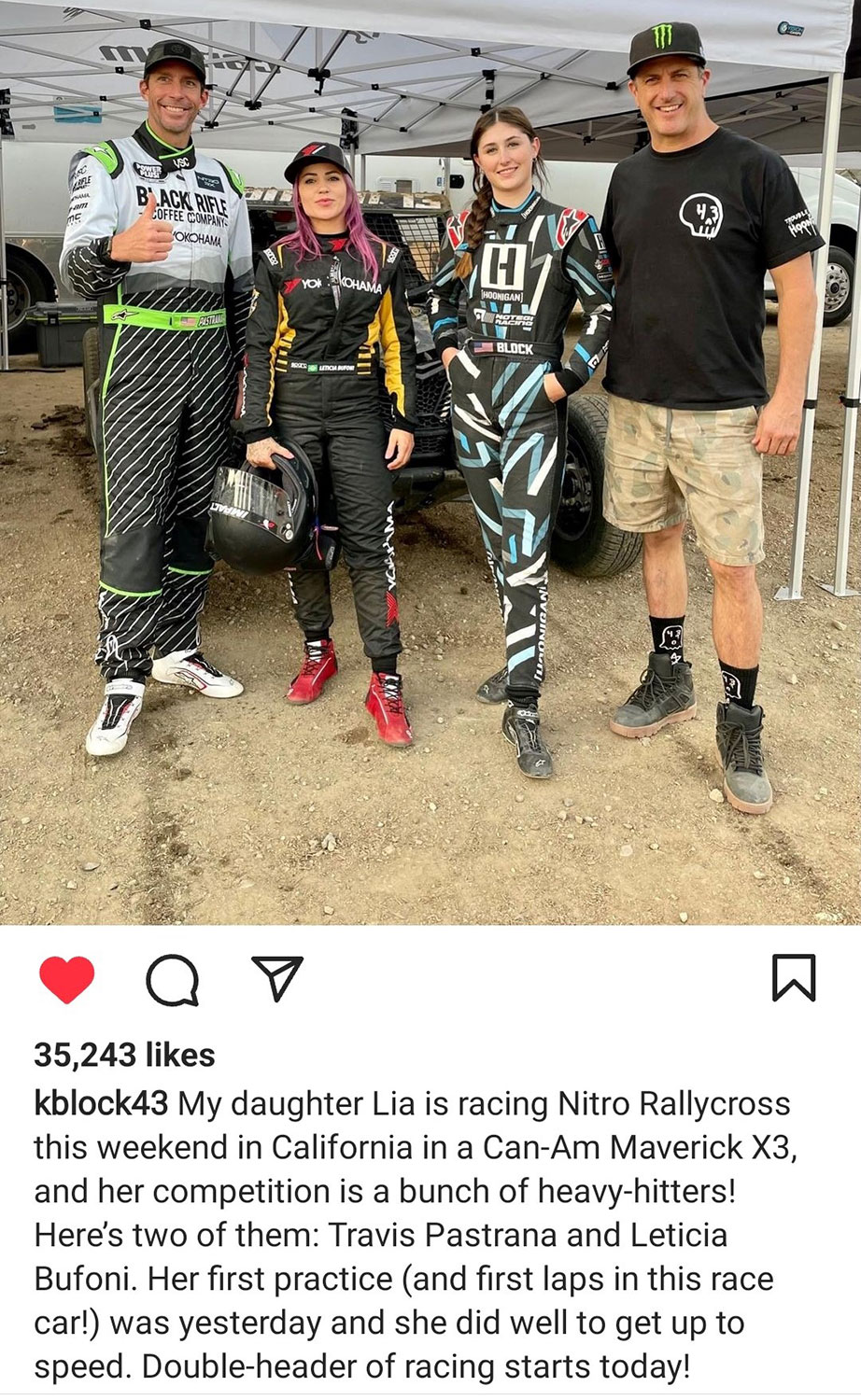 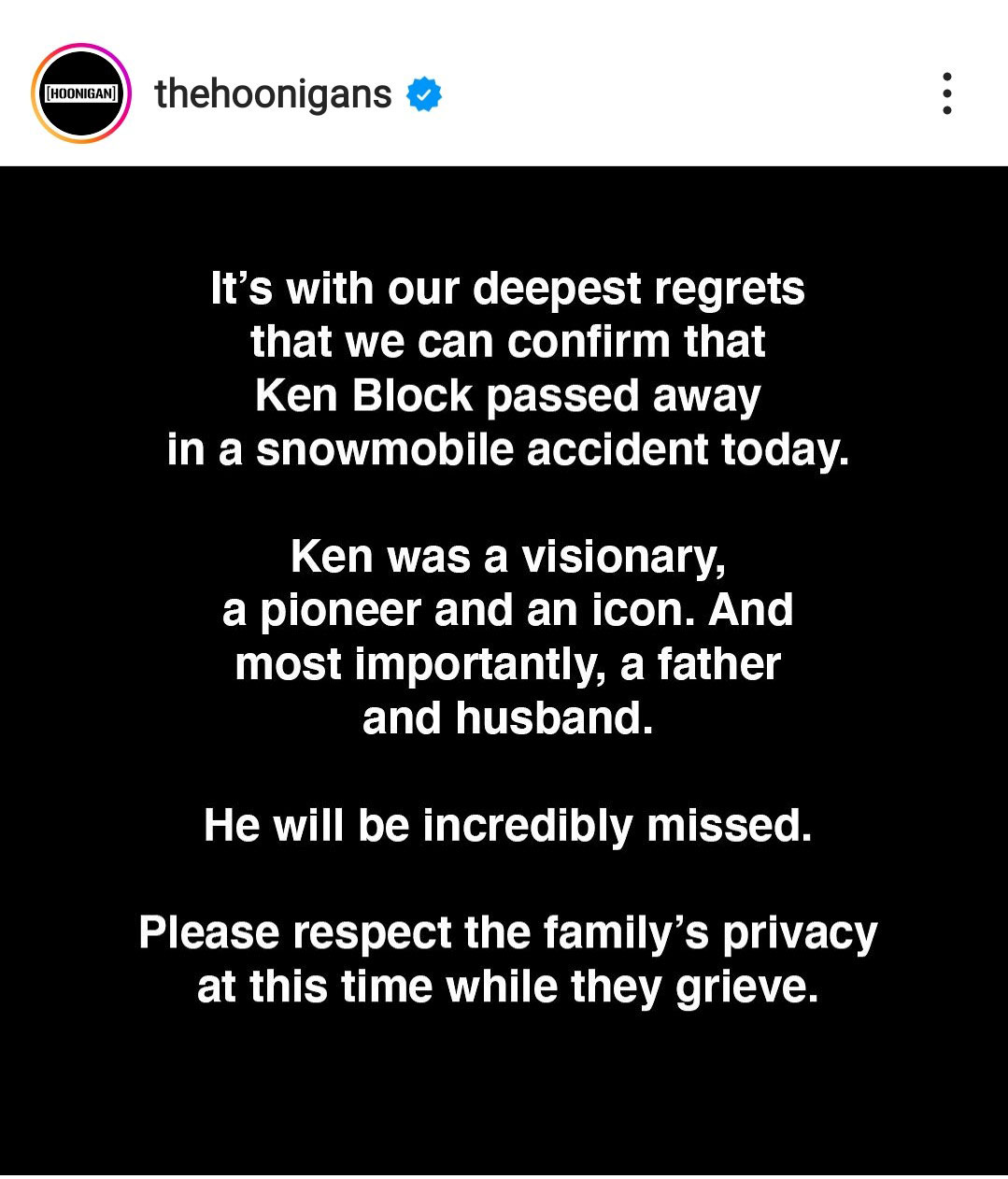